Train your workers to understand why flammable liquids ignite

Staff training is a critical when your workers and contractors handle Class 3 Flammable Liquids. In this blog we are going to look at 5 incidents involving flammable liquids that actually occurred at workplaces in the USA. Sadly, all of these incidents could probably have been avoided if the workers had a greater understanding of the flashpoint and explosive range of the Class 3 Flammable Liquids they were handling at the time.

PLEASE NOTE: This blog was not written to establish blame or point fingers, our primary objective is to create greater awareness of flammable liquids safety and foster a better a better understanding of what can ignite solvents, adhesives and fuel.

This incident highlights the importance of carrying out thorough (and regular) training with your workers and onsite contractors. There are several possibilities that could have contributed to this incident:

Remember, it is a requirement of the WHS Regulations that workers (and external contractors) must be properly trained and supervised when carrying out work or maintenance at your workplace.

Two workers were using a flammable solvent to remove linoleum and glue from the floor of an apartment building. They did not shut off the gas stove and water heater before they commenced work, and the vapours in the room soon ignited. Both workers suffered 2nd and 3rd degree burns in the subsequent explosion and fire.

Training your workers and having clear operating procedures is especially important if you have work teams that use highly flammable paints, solvents, adhesives and cleaning projects at temporary worksites. Don’t forget that remote work teams also require supervision.

The workplace incident detailed above is not isolated — and in many similar occurrences — workers have simply forgotten to turn off electrical and gas appliances before applying flammable solvents or glues. Developing a set of work procedures and system checks is an essential safety measure. They should include:

A worker was refilling a petrol-powered compressor using a portable container with an attached plastic funnel. The funnel didn’t create a complete seal around the nozzle and petrol spilled onto the hot muffler of the compressor. The fuel ignited and the worker was hospitalised with 2nd and 3rd degree burns.

One of the factors in this particular incident was the portable fuel container being used had only recently been purchased. It was a different style to previously used jerry cans. The primary reason for the purchase of the new jerry can was because the funnel/nozzle was adjustable and took up less space during storage.

This incident immediately highlights the importance of:

Training should consist of more than just telling workers, ‘don’t spill petrol on the muffler’. Explain to your workers how hot a muffler can get — as well as the auto-ignition temperature of petrol — and then what happens when heat meets petrol.

A worker poured petrol over a stack of pallets to prepare them for burning. The worker was smoking at the time. The burning cigarette ignited the petrol and the worker died after sustaining burns to 97% of their body.

It seems crazy that an incident like this could still be happening (and yes it happened in this very decade). So we’ll just mention briefly to please consider:

A worker was on the phone to a chemical supplier and wanted to check the existing stocks of flammable liquids stored in a fuel drum. The worker used a cigarette lighter to look inside the drum. The vapours immediately ignited, and the drum exploded. The worker died from injuries relating to burns and being struck in the head by the drum.

Were you shocked when you read about this terrible workplace death? We were. There are so many system failures in play here — because it seems obvious that:

Please make sure the workers at your job site know what they are doing and have clear procedures to follow. Even small quantities of flammable liquids must be managed carefully to prevent them from causing deadly fires and explosions.

Flammable liquids safety in the workplace can only be achieved when the chemicals you carry are handled and stored correctly. Train your workers properly — so they understand how flammable liquids burn, and what could cause them to ignite. For more information about the fire and explosion hazards of Class 3 Flammable Liquids, why not download our new eBook Essential Considerations When Storing Flammable Liquids Indoors. Use it as the basis of your next training or induction program. Download and read it today by clicking on the image below: 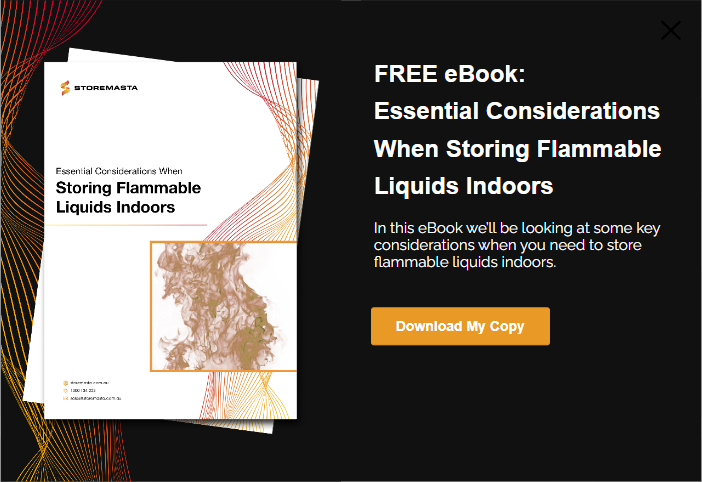 Subscribe to stay up tp date with the latest from STOREMASTA®