Dangerous Goods – What are they?

Dangerous Goods are substances or articles that pose a risk to people, property or the environment, due to their chemical or physical properties.

The 9 classes of Dangerous Goods 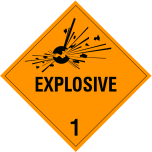 When I think of the term ‘explosive substances’, I think of bombs, war, loud explosions and huge mushroom clouds – things that go ‘bang’. However, not all explosive substances are used for such destructive aims. The stunning displays we see every year on New Year’s Eve are also a result of a chemical reaction caused by Explosive Substances – Fireworks!

A solid or a liquid substance (or a mixture of substances) which is in itself capable by chemical reaction of producing gas at such a temperature and pressure and at such a speed as to cause damage to the surroundings.

Commonly examples of Explosives are: 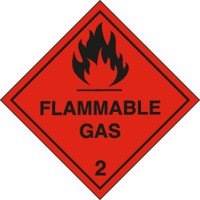 Remember the Hindenburg disaster at New Jersey in May 1937? Most of us weren’t around at the time, but would have learnt about it at school. The explosion of this airship killed 36 people and was destroyed in 32 seconds; but what was it that caused it? The ignition of Hydrogen – a Class 2.1 Flammable gas. 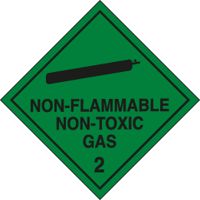 Gases are defined by the ADG Code as:

There are 3 Sub-divisions of Gases:

The confusion between Class 2 and Class 3 is due to Liquid Petroleum Gas being both a liquid and a gas.

The fact that it is liquid and also flammable, immediately makes a person think: “Ah this must be a Class 3 Flammable Liquid”.

However, the truth is, its true classification is a Class 2 Gas. As stated above, the ADG Code defines a gas as being completely gaseous at 20 degrees Celsius at a standard pressure of 101.3 kPa. Liquid Petroleum Gas is flammable hydrocarbon gas, which is liquefied through pressurization. When you release some of the pressure in a gas bottle by turning on your gas appliance, it turns back into gas vapour. Thus, it is still classified as a gas, not a flammable liquid.

Common examples of Gases are: 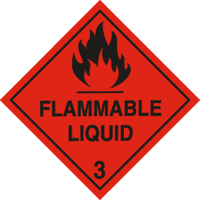 Everybody knows what Flammable Liquids are – We use them every day! We put fuel in our cars to get to work, we use oil to cook our foods, and occasionally we enjoy a nice drop of whiskey. These are all examples of flammable liquids: fuel, oil, alcohol.

Flammable liquids can pose serious hazards due to their volatility, combustibility and potential in causing or propagating severe conflagrations.

There are no sub-divisions within Class 3.

Common examples of Flammable liquids are:

The answer is No. No, no, no. Flammable solids are substances liable to spontaneous combustion – meaning that: They are liable to burst into flames due to internal heating through exothermic internal reactions, without the addition of heat from an external source; and substances that, in contact with water, emit flammable gases.

Flammable solids can be divided into three divisions:

Division 4.1 – Flammable solids: These are defined as solids which under conditions encountered in transport, are readily combustible or may cause or contribute to fire through friction; self-reactive substances which are liable to undergo a strongly exothermic reaction; solid desensitized explosives which may explode if not diluted sufficiently.

Common examples of flammable solids are: 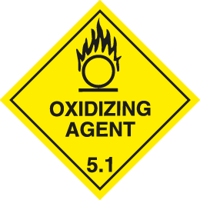 Oxidizing substances and organic peroxides are used extensively around us without most of us even knowing - They are found in the agricultural industry in fertilizers, in the pharmaceutical industry in medications, and also often used in high school and college laboratories to conduct reduction and oxidization experiments. 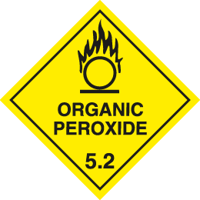 Believe it or not – they are even used in toothpaste: Calcium peroxide in toothpaste decomposes when it comes into contact with water to form a small amount of hydrogen peroxide, which then whitens the teeth!

Class 5 dangerous goods are divided into two divisions and are described by the ADG Code as follows:

Common example of Oxidizing substances and Organic peroxides are: Class 6 toxic and infectious substances are also used widely around us, especially in the agricultural industry for use in pesticides. They are also used extensively in the medical industry as they have important physiological effects on humans, E.g. Morphine, strychnine, quinine, chloroform.

Cigarettes are full of toxic substances, one of these being the alkaloid nicotine. Hence the many warnings and advertisements denouncing smoking. There are many other examples of toxic substances such as Barium which is used in fireworks to impart a green colour, and chlorobenzylidene malononitrile used in tear gas.

Infectious substances are those substances like medical and clinical wastes and biological and medical samples and specimens. Any substances which can cause disease in humans or animals. Substances containing pathogens such as bacteria, viruses, fungi and parasites.

Class 6 substances are divided into two subdivisions and are defined by the ADG Code as below:

Division 6.1 – Toxic Substances: These are substances liable either to cause death or serious injury or to harm human health if swallowed or inhaled or by skin contact.

Division 6.2 – infectious substances: These are substances known or reasonably expected to contain pathogens. Pathogens are defined as micro-organisms (including bacteria, viruses, rickettsiae, parasites, fungi) and other agents such as prions, which can cause disease in humans or animals.

Everyone has heard of Hiroshima and Nagasaki – the atomic bombs dropped on these cities caused hundreds of thousands of civilian casualties and brought about the end of World War 2. These explosions were a result of atoms with an unstable nucleus undergoing radioactive decay – Uranium and Plutonium fission bombs.

There are no subdivisions for Class 7

The ADG code defines this class as below:

Radioactive material means any material containing radionuclides where both the activity concentration and the total activity in the consignment exceed the values specified in 2.7.2.2.1 to 2.7.2.2.6.

A radioactive nucleotide is an atom which an unstable nucleus which emits excess energy as alpha or beta particles or as gamma rays. Unstable nucleus’s undergo radioactive decay to achieve a more stable state.

Common examples of Radioactive Materials are: 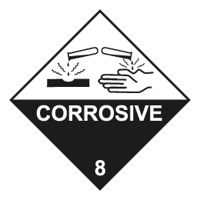 If you were as curious as I was when I was a kid, it probably wouldn’t have taken you long to discover what was inside a battery, and then proceed to spill the contents onto the floor of your dad’s workshop – only to quickly make a dash for it when he came around the corner to see what you had done!  To this day, there is still be a dark stain on the concrete from where the battery acid ate away at the concrete. Whoops!

Other uses of corrosives are in cleaning chemicals, for example, drain cleaners contain acids or alkalis which dissolve greases and proteins inside water pipes.

There are no subdivisions for Class 8.

Class 8 substances (corrosive substances) are substances which, by chemical action, will cause severe damage when in contact with living tissue, or, in the case of leakage, will materially damage, or even destroy, other goods or the means of transport.

Common examples of Corrosive substances are: 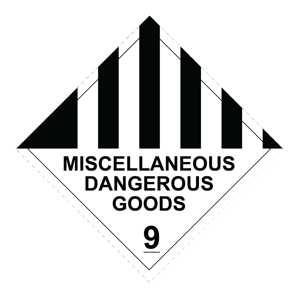 “Miscellaneous dangerous goods? I suppose that means a mixture of all the previous classes, does it?”

The answer to that question, is no. The ADG code gives us the following defintions:

Miscellaneous dangerous goods present a wide variety of potential hazards to human health and safety, as well as also presenting hazards to infrastructure and/or their means of transport.

As it will have become clear, dangerous goods are all around us and they vastly affect each of our lives daily - especially in the workplace. Due to the many risks dangerous goods pose to people, property and the environment, it is essential to store these safely and compliantly to minimise any potential harm that could be caused. However, it is often difficult to distinguish what class of dangerous goods your products are. The many standards and regulations for compliant storage of each class can also be very confusing, making it an extremely difficult task for those responsible for storing them safely.