How Does A Lithium-Ion Battery Work?

The safety issues that come with charging a lithium-ion battery occur due to the specific way that the battery works.

Lithium-ion batteries operate differently from other batteries, such as a lead acid battery, due to the lithium ions moving through electrolyte between the positive (cathode) and negative (anode) electrodes.

Compared with a more traditional workplace battery, such as a lead-acid battery, lithium-ion batteries provide superior lifespan, efficiency, performance and energy density. However, the innovative design of a lithium-ion battery is not without safety issues. This kind of battery has been known to overheat, melt, ignite and explode under certain conditions — some of which we’ll detail below.

What Safety Issues Are Associated With Lithium-Ion Battery Charging?

While lithium-ion battery fires and explosions thankfully aren’t a regular occurrence in workplaces, they can (and do) happen in circumstances when the stability of the battery is put at risk.

There are many factors which can affect the safety of a lithium-ion battery.

If the battery does suffer a short circuit (due to damage, age or manufacturing flaws) or there is an unsafe electrical current (due to overcharging or an electrical fault), it can spark thermal runaway which can lead to a lithium-ion battery fire or explosion.

There are two key considerations to make when caring for your lithium-ion batteries. These are providing a temperature-controlled environment (cool, dry) for storage and charging, and ensuring that charging voltage is regulated.

If these two considerations are not actioned by your organisation, there is a risk that thermal runaway could occur.

A single battery cell can be affected by thermal runaway. However, if you’re storing other lithium-ion batteries nearby, these will also succumb to thermal runaway — and increase the impact of a fire or explosion.

Remember, once the process of thermal runaway has begun in your battery, it can’t be stopped. Thermal runaway can lead to incidents of fire and explosion.

Lithium-ion battery fires can be sparked by a range of issues that could involve the battery itself, the charger, how the battery’s been handled or the environment in which it’s being used or charged.

But what is a lithium-ion battery fire and why is it so dangerous? Let’s first have a look at a real-life example of a devastating battery fire that occurred in 2021 in Australia.

A fire broke out at the largest Tesla battery installation in the southern hemisphere at the Victorian Big Battery Site located near Geelong. The lithium battery became engulfed in flames which quickly spread to a nearby battery tank. The lithium battery fire took three days to extinguish and has raised concerns about the safety of lithium batteries for renewable energy storage. 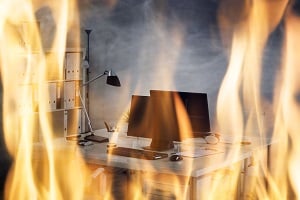 Lithium-ion batteries have been responsible for causing many devestating workplace fires across Australia and the globe.

Why Are Lithium-Ion Battery Fires So Dangerous?

A lithium-ion battery fire is particularly hard to contain — and can therefore put real strain on the emergency services who are attending the site.

As a self-sustaining fire, they are extremely hot and fast burning. They release large amounts of dangerous fumes which are harmful to human health. The batteries can also explode in the fire, which leads to extensive damage both people and the business itself.

Firefighters in Australia currently use water to extinguish lithium-ion battery fires, but the blazes have proven to be extremely destructive and hard to put out. The lithium-ion battery, being so susceptible to heat, will continue to catch alight even after it’s been extinguished by fire crews.

Firebox Australia has developed a LI-ion Fire Solution extinguisher to combat this hazard. As a water type fire extinguisher, with F-500 Encapsulator agent, the extinguisher works to remove heat and halt the reaction of the electrode material and components within the battery. The F-500 agent can penetrate the structure of the battery and successfully extinguish the lithium-ion battery fire.

Why Is Fire Suppression Important With Lithium-Ion Battery Stores?

Due to the risk of thermal runaway and lithium-ion battery fires, it’s important that fire suppression is considered when determining your battery charging and storage needs.

If a fire breaks out when your lithium-ion batteries are charging, it’s vital that the fire is contained as much as possible. When a battery cell ignites without a fire suppression system in place (ie. a battery cell left charging on a worker’s desk or multiple batteries left charging in an office), the fire can quickly spread through the workplace.

Lithium-ion battery fires can rapidly engulf buildings and destroy property. They will also spark further thermal runaway in nearby battery stores — causing extreme damage to your organisation, and potentially the surrounding community.

One of the most important features that you should consider for your lithium-ion battery stores is the provision for fire suppression. If a lithium-ion battery fire did break out in your workplace, your battery charging and storage facility should contain the fire so emergency evacuation plans can be actioned.

While a fire suppression system will not stop a lithium-ion battery fire, it will contain the blaze for an amount of time which enables your workplace to take action — and save lives.

Fire suppression will also assist with containing the fire, so it doesn’t spark further problems when it meets your other lithium-ion battery stores or workplace chemicals. 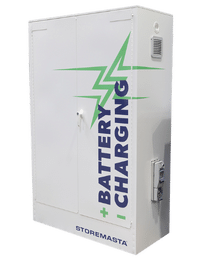 Choosing a battery cabinet to charge and store your lithium-ion batteries can reduce the risk of fire.

Battery cabinets with fire suppression may offer design and construction features such as:

What Other Features Are Important For Risk Reduction?

While a fire suppression system for your battery charging cabinet will help you reduce the impact of a blaze caused by thermal runaway, there are other features you should consider if you want to prevent battery fires from occurring.

By choosing to handle, store and charge your batteries in a safe and careful manner, you can reduce the risk of lithium-ion battery fires in your workplace. Charging your batteries with a quality charger, in a temperature-controlled and ventilated environment, is an excellent way of reducing risk. However, in the event of battery fire, it’s essential that your battery cabinet is equipped with a fire suppression system.

If you’d like to learn more about creating a safer work environment in your organisation, we have an eBook that can help. How To Manage The Risk Of Hazardous Chemicals In The Workplace can be applied to any dangerous goods in your organisation – including Class 9 batteries. It explains how you can systematically identify, assess and control and sustain chemical risks such as lithium-ion battery fires. Grab your copy today – it’s completely free and yours to download now. 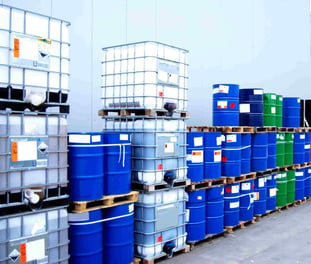 Have you just bought a corrosive storage cabinet or installed a chemical storage container outdoors? Then this blog is ...

Can Class 8 Acids and Alkalis Be Stored Together?

When you’re carrying any type of corrosives, one of the most common queries is ‘Can Class 8 acids and alkalis be stored ... 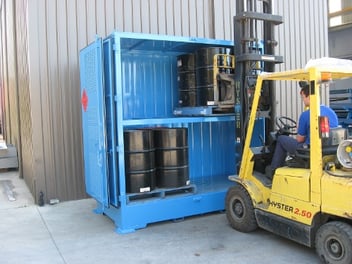 Are you thinking about storing dangerous goods outdoors? Before you set up your chemical store, there are a few key ... 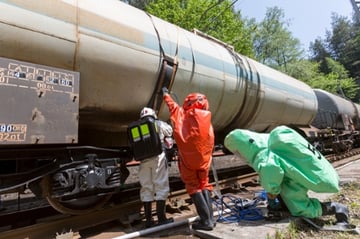 Do you feel confident that your staff are completely prepared to effectively manage a successful chemical spill ...