Hydrogen peroxide, also known as hydrogen dioxide and by the formula H2O2, is a chemical compound used primarily as an environmentally-friendly oxidiser (or oxidant), deodoriser, bleaching agent, and antiseptic.

This post provides a complete guide to the safe handling and storage of hydrogen peroxide for any workplace in Australia.

What is Hydrogen Peroxide?

Hydrogen peroxide is also known by the chemical formula H2O2

In its pure form at room temperature, hydrogen peroxide is a colourless, slightly viscous, inorganic liquid with a weakly acidic pH, a bitter taste and a characteristic sharp odour. Tiny amounts of gaseous hydrogen peroxide occur naturally in the air around us.

Hydrogen peroxide is biochemically formed in human bodies and the bodies of other animals but it is actually toxic to cells.

Hydrogen peroxide is the simplest in the peroxide class, which means its molecules contain two oxygen atoms covalently bonded to one another. Because H2O2 is miscible - or totally soluble in water (H2O) - it’s able to be produced commercially in aqueous solutions of various concentrations or strengths.

What is Hydrogen Peroxide Used For?

Hydrogen peroxide is recognised as one of the cleanest and most versatile of all chemicals. Its strong oxidising properties make it a powerful bleaching agent and popular disinfectant.

Since its discovery by Louis Jacques Thénard in 1818, hydrogen peroxide has been used industrially and in laboratories in concentrations of up to 98 percent purity.

Hydrogen peroxide is a staple inside many of today’s households at much lower concentrations - generally only 3 to 9% - in certain medicines and as a bleaching agent for clothes and human hair.

In industry applications, higher concentrations of hydrogen peroxide are used as a bleaching agent for paper and textiles, for producing common organic chemicals and foam rubber, and in rocket engine fuel.

Hydrogen peroxide is used as an exceptionally efficient, non polluting oxidising agent, thanks to its low molecular weight. Other industrial uses typically involve the preparation of other peroxides.

How Do You Make Hydrogen Peroxide Industrially?

The production of hydrogen peroxide increased dramatically in the mid-1920s following the introduction of electrolytic processes and after industrial bleach applications were developed.

Today, hydrogen peroxide is primarily manufactured using the anthraquinone process, the procedures for which were formalised and patented in the 1930s.

Manufacturing H2O2 essentially involves the catalysis of the reaction of H2 (hydrogen) with atmospheric O2 (oxygen) to form H2O2. The anthraquinone - a type of hydrocarbon - is used and reused as the H2 carrier in a cyclic operation.

Along with a number of ancillary processes, the cyclic anthraquinone process consists of four sequential stages:

What are the Commercial Grades of Hydrogen Peroxide?

The main commercial grades of hydrogen peroxide are aqueous solutions containing either 20, 27, 30, 35, 50, 60, 70, or 90 percent hydrogen peroxide and minimal quantities of stabilisers - typically tin salts and phosphates - to help suppress any decomposition.

Why is Hydrogen Peroxide Dangerous?

Hydrogen peroxide is a powerful oxidising agent and explosive vapours can form if it comes into contact with certain organic compounds.

Although hydrogen peroxide is not flammable, it generates significant amounts of oxygen when it is decomposing and that supports combustion.

In either pure or diluted form, hydrogen peroxide can be hazardous to human health.

Household-grade concentrations of hydrogen peroxide are generally safe to use, but they should never be ingested (swallowed). Decomposition of the chemical in the stomach releases significant amounts of gas - as much as ten times the volume of a typical domestic-strength three per cent solution - which can lead to painful or harmful internal bloating.

People should especially avoid contact with airborne hydrogen peroxide mist. Inhalation of concentrations above 10 per cent can cause severe pulmonary irritation. Exposing the eyes to concentrations of five per cent or higher can cause permanent vision loss or damage to mucous membranes. Solutions containing more than about eight per cent hydrogen peroxide can lead to blisters, burns and whitening of the skin.

Watch this brief video for an explanation of how a BLEVE occurs.

Due to the many potential hazards associated with the handling and storage of this chemical, hydrogen peroxide (H2O2) should be handled with care.

The National Transport Commision (NTC) sets out the requirements for handling and transporting dangerous goods, including hydrogen peroxide, in the Australian Code for the Transport of Dangerous Goods by Road & Rail (ADG Code). Edition 7.6 of the Code is mandatory as of 1 July 2019.

Hydrogen Peroxide is a strong oxidising agent that also has corrosive properties.

It meets the Australian Dangerous Goods Code classification criteria for both:

Hydrogen Peroxide has a greater oxidising ability than corrosion ability and is therefore given a Class 5 - Division 5.1 Dangerous Goods classification. It also has a subsidiary hazard classification of Class 8 to cover its corrosive hazard. The signage and definitions for theses dangerous goods classifications are shown below: 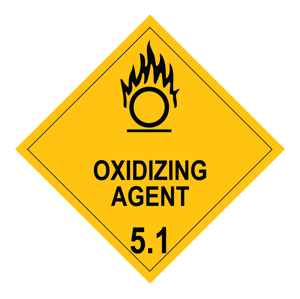 The Australian Dangerous Goods Code defines Oxidising Substances as:
Substances which, while in themselves not necessarily combustible, may, generally by yielding oxygen, cause, or contribute to, the combustion of other material. Such substances may be contained in an article.

The Australian Standard that outlines the storage and handling requirements for oxidising agents is: 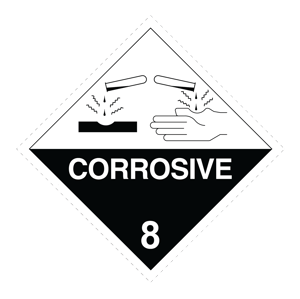 The Australian Dangerous Goods Code defines Corrosive Substances as:
Class 8 substances (corrosive substances) are substances which, by chemical action, will cause severe damage when in contact with living tissue, or, in the case of leakage, will materially damage, or even destroy, other goods or the means of transport.

The Australian Standard that outlines the storage and handling requirements for corrosive substances is:

How to Store H2O2 Safely Indoors and Outdoors

The Australian Standard AS 4326:2008 outlines the correct methods for storing and handling oxidising agents, including hydrogen peroxide (H2O2). Importantly, this standard stipulates that all cabinets and stores used to store oxidants conform to the Australian Dangerous Goods Code.

There are three main factors required for oxidising agent storage to comply with Australian Standard AS 4326-2008:

The maximum quantity of oxidising agents such as hydrogen peroxide that can be stored in each cabinet depends on the cabinet’s location. 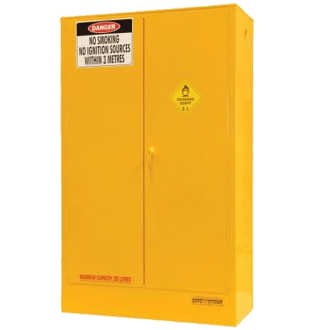 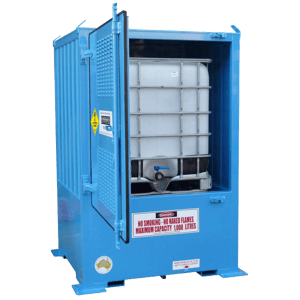 Cabinets used to store oxidising chemicals such as hydrogen peroxide must adhere to the strict requirements in terms of their size and construction. All sides of a cabinet must from double-walled sheet steel, with at least 40mm of space between the walls. The space inside the cabinet can be used to contain a non-flammable material or left empty.

Any cabinet shelves must be perforated to allow air to move freely within the cabinet. If ventilation is required, vents must be directed away from any potential sources of ignition and areas where anyone can congregate or move through. Cabinet ventilation must be sufficient to minimise potential exposure to any vapour or dust present in the storage area, in line with recommended workplace exposure standards for chemicals.

Cabinet doors must be self-closing and close-fitting with no air-gaps between the doors and the body of the cabinet. Doors must also have catches that are not made of plastic or zinc die. These catches must automatically release in the event of an increase in pressure within the cabinet.

AS 4326:2008 also stipulates that the lower compound of indoor storage cabinets must be at least 150mm deep and large enough to hold at least 25 per cent of the cabinet’s total capacity. The cabinet’s sump must also be liquid-tight to prevent any spillage contaminating the workplace. Spill trays and Portable collapsible bunds can be used to collect spills and prevent corrosion.

To ensure your chemical storage and handling areas fully compliant with WHS Legislation and Australian Safety Standards spill bunding must be non-combustible material. We recommend using steel bunds with polyethylene liners to combat the corrosive properties. STOREMASTA spill bunds are manufactured to Australian Standards and built for the tough Australian climate. They are long lasting and have forklift channels for safe transfer around the job site. 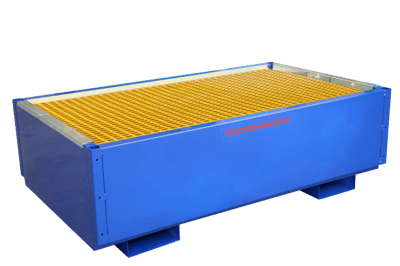 How to Correctly Manage Chemical Hazards

Every Australian business has an obligation under the relevant sections of the Work Health and Safety (WHS) Regulations to eliminate chemical hazards. If your business is unable to completely eliminate these hazards in the workplace, you need to follow the Hierarchy of Controls and find ways to minimise or control these hazards.

Dangerous goods storage specialists STOREMASTA have developed an eBook which explains how to use the Hierarchy of Controls to control the risks associated with hazardous chemicals such as hydrogen peroxide (H2O2). This free eBook helps you select the most effective risk control measures and implement all the required mandatory controls according to the current legislation. 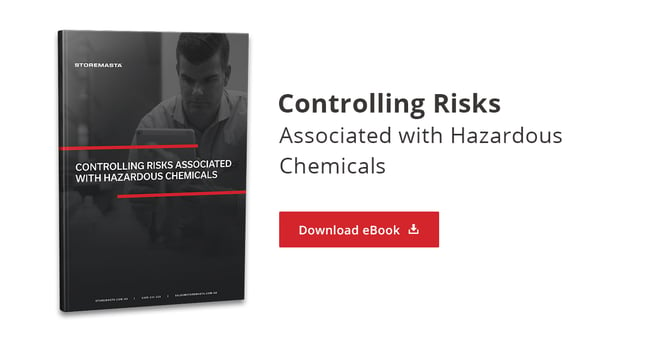 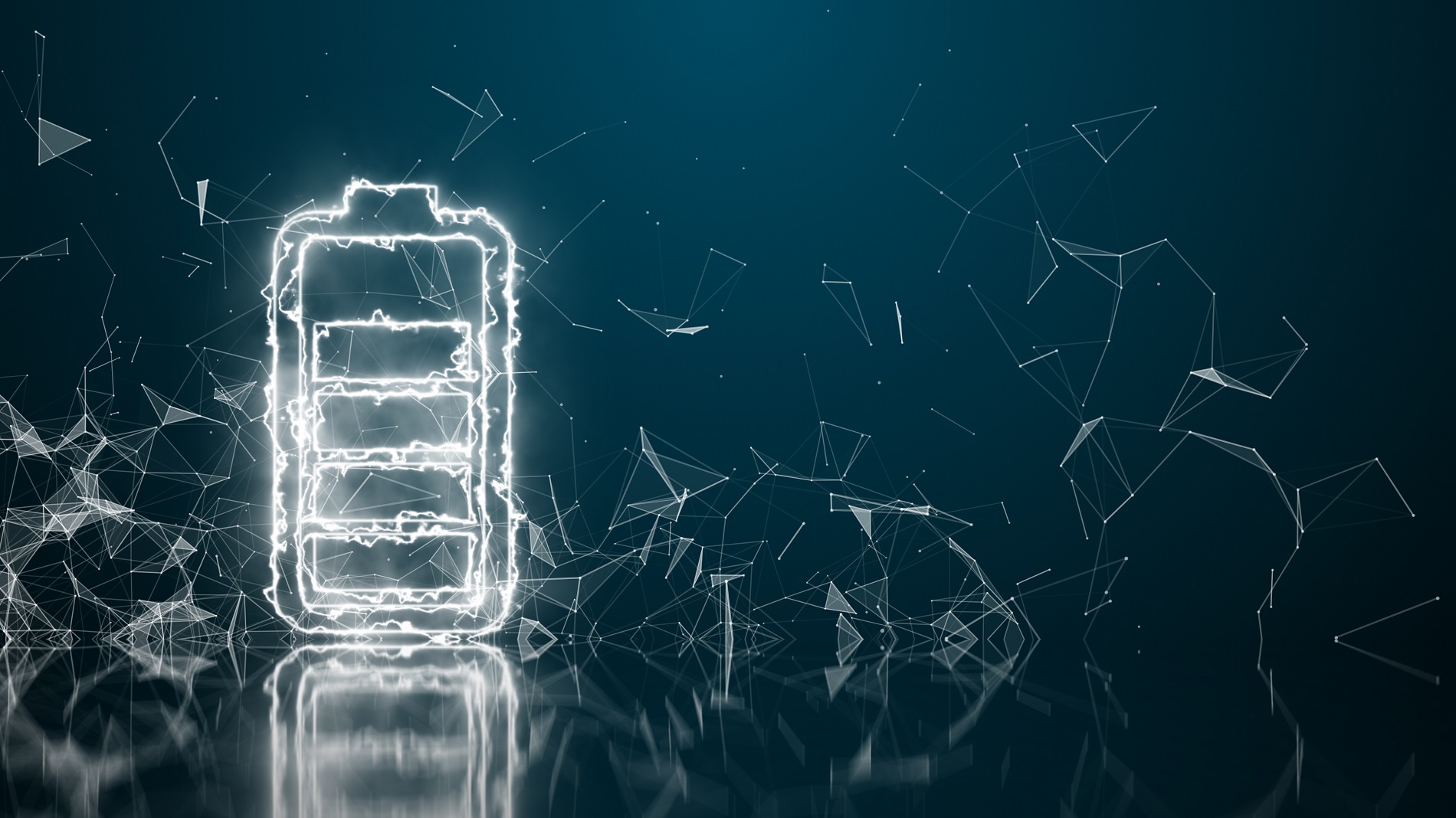 How Does Temperature Affect The Safety Of Lithium-Ion Batteries? 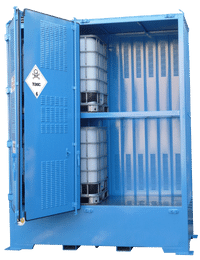 One of the considerations you’ll have to make when choosing storage for your dangerous goods, is whether to store your ... 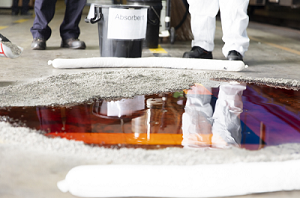 How Do You Stop Bulk Chemicals From Spilling?

For organisations that are carrying bulk quantities of Dangerous Goods, spill containment and management is one of the ... 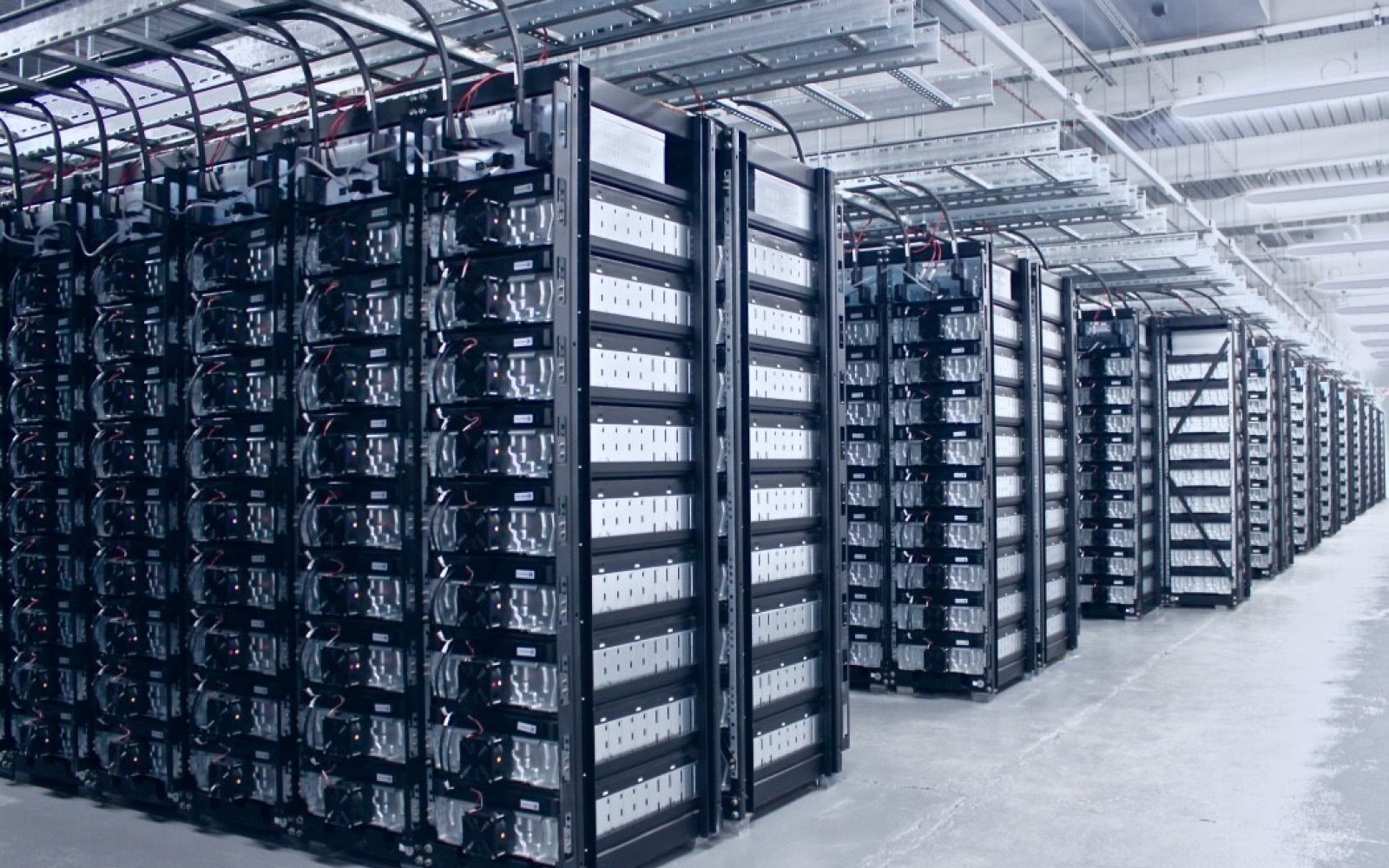 What Is The Safest Way To Store Batteries?

When you think of Dangerous Goods, you probably don’t think about the batteries you use to power your daily operations. ...